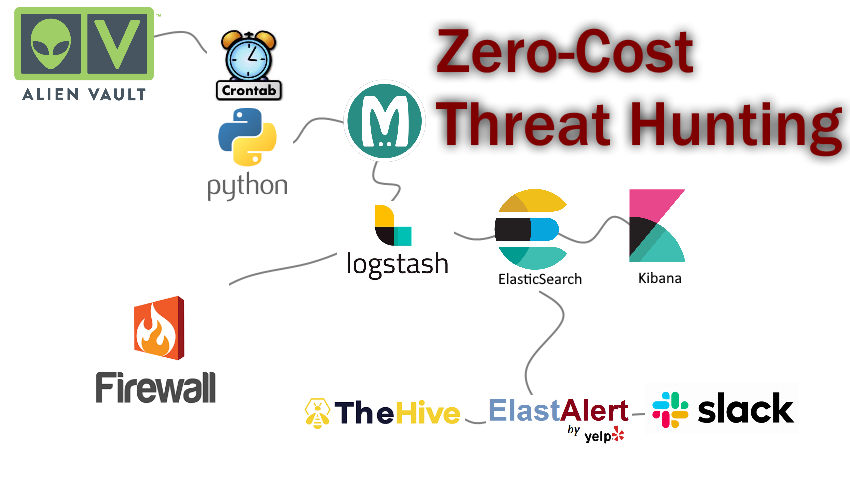 Elastic Stack is an awesome suit of products used for several analysis activities since its inception utilizing its amazing searching and visualization capabilities. Here we are trying to leverage the Elastic Stack with few other components to a threat hunting platform to build a reliable blacklist block containing malicious IPs obtained from OSINT and analyze the network traffic in real-time against this for any malicious traffic to any of these IPs.  To achieve this we are using FIREHOL, a service provided by OSINT. It analyses security IP Feeds, mainly related to online attacks, on-line service abuse, malware, botnets and other cybercrime activities. It has several lists. In our case we are going to choose the alienvault_reputation list.

Elasticsearch will act as our log repository. It’s incredibly powerful and versitile, and when coupled with Logstash for log ingestion and Kibana for visualization, provides a robust platform for all types of data.

Logstash is mainly made up of three parts Input, filter and output. The input section is where we define the source of the logging data. The filter section could be used for parsing, normalizing, transforming or multiple other methods to prepare the data for sending out to ElasticSearch or any other analytics engines. The output section defines where the data processed by Logstash is stored. This can be ElasticSearch, Kafka or any other database options. Please refer the output filter documentation for supported database options.

ElastAlert is an open source project started by the engineers at Yelp to provide an alerting mechanism for Elasticsearch. It’s an independent project that doesn’t need to run on the same server. It simply queries Elasticsearch through the REST API and has numerous outputs to alert on a match. One of those outputs will feed the information into Slack.

Memcached is simple yet powerful. Its simple design promotes quick deployment, ease of development, and solves many problems facing large data caches. Its API is available for most popular languages.

The software utility cron is a time-based job scheduler in Unix-like computer operating systems. Users that set up and maintain software environments use cron to schedule jobs to run periodically at fixed times, dates, or intervals

Like most of the NextGEN Firewalls, in our scenario the Firewall is producing the logs in Key=Pair format.

This filter helps automatically parse messages (or specific event fields) which are of the foo=bar variety.

For example, if you have a log message which contains ip=1.2.3.4 error=REFUSED, you can parse those automatically by configuring:

The above will result in a message of ip=1.2.3.4 error=REFUSED having the fields:

The CIDR filter is for checking IP addresses in events against a list of network blocks that might contain it. Multiple addresses can be checked against multiple networks, any match succeeds. Upon success additional tags and/or fields can be added to the event.

Getting the blacklist block

Memcached installation and configuration is simple.  It is also supported by ElasticSearch/Logstash which makes it perfect for our requirement. It also comes with the huge additional benefit of storing the data in memory, so lookups from Logstash to the data will be blazing fast.

The Memcached application is a very simple key-value store running in memory, you can telnet into the application running by default on port 11211.

The application is made up of only a few commands. The ones we are in need of here, are the “get” and “set” commands. Both of which are quite self explanatory….

Once it is installed start the service using

Also systemctl enable memcached enables the service in the startup

Once the service is started test the connection using telnet

The set command will be used by our Python script, to set the data into the store.

The get command will be used by the Logstash filter plugin, to query the store for a specific IP and return the result back to Logstash.

There are many modules available for python to interact with memcached. Here we use pymemcache which is simple yet powerful library for get / set operation of memcached.

Shell script to fetch and update the memcached with IP blocks

Cron job entry to run the script daily at 7.00 am

The Memcached filter provides integration with external data in Memcached.

It currently provides the following facilities: – get: get values for one or more memcached keys and inject them into the event at the provided paths – set: set values from the event to the corresponding memcached keys

What it does here, once the IP is identified as an external IP, it will be searched in the memcached database. If the search is successful the Value of the Key=Value pair will be returned and stored in a separate field that is “ioc_ip”

Now search the firewall log index for the additional field created for traffic to external IP. We require to refresh the field list to make the new field searchable 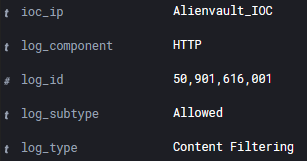 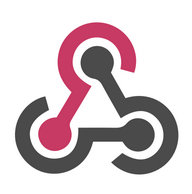 Incoming Webhooks are a simple way to post messages from apps into Slack. Creating an Incoming Webhook gives you a unique URL to which you send a JSON payload with the message text and some options.

The web hooks URL generated is used in the Elastalert rule to send alerts to Slack channel when a traffic is originated from the internal network to any of the blacklisted IPs.